What to do while at work at 5:15 am, when your appointment cancels on you? This looks good... 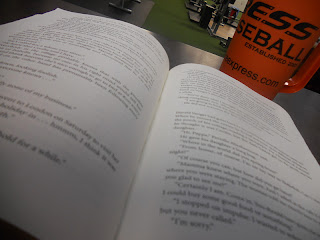 Normally I don't do this, but at 5:15 in the morning it's tough to get motivated to do anything when you client cancels on you.  Plus I am totally sucked into The Girl With The Dragon Tattoo!  I feel like it's taking me forever to read though... I guess it is 465 pages long.

After work I did Calorie Crusher #2, compliments of a program written up by one of the trainers there, and ran 4 miles... 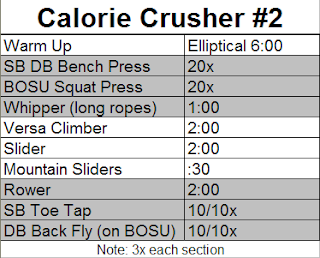 I wore my heart rate monitor during CC #2 and burned 600 calories (not including run)! It is definitely a calorie crusher!  I didn't wear it during the first one, but next time I do it I will be sure to wear it and report back on the results.

In case you missed the first one, here it is :) 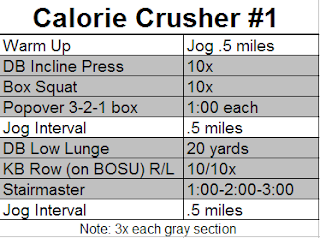 After getting my sweat on I went to my sister's to visit with her and my nephew... we spent most of the afternoon hanging out in a Scooby Do tent in the living room... the great outdoors! 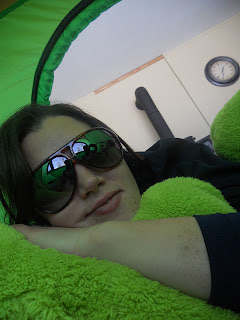 Dinner and snack yesterday were both new recipes and both delicious!

I didn't have a skillet that I could put in the oven like it called for so I tried just baking it in a pie pan.  It worked, but it took much longer than it was supposed to.  I baked my frittata at 400 degrees for about 20 minutes. I then bumped up the heat so I could broil it for about 5 minutes.  After 5 minutes on broil I noticed there was still liquid from the eggs, so I drained a little of the excess (we were hungry!) and put it back in for another couple minutes.

Here are the instructions that you should follow if you have a skillet.

1. Preheat broiler.
2. Beat eggs, egg whites, salt and pepper in large bowl until blended. Stir in ham, broccoli and peppers.
3. Melt butter over medium heat in 10-inch oven proof skillet with sloping side. Pour egg mix into skillet; cover. Cook 5-6 minutes or until eggs are set around edge. (Center will be wet.)
4. Uncover; sprinkle cheese over frittata. Transfer skillet to broiler; broil 5 inches from heat source, 2 minutes or until eggs are set in center and cheese is melted. Let stand for 5 minutes; cut into wedges.

The recipe was really great, I wish I had the equipment though.  My boyfriend, J, really liked it and said "you can make that any day!" It really is just a glorified omelet, but it is awesome! 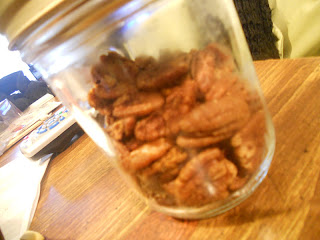 1. Heat oven to 375 degrees. Line baking sheet with foil.
2. Combine butter, Worcestershire sauce, chili powder, garlic powder, onion powder, salt and cayenne in medium bowl; add pecans and toss to coat thoroughly.
3. Spread evenly onto baking sheet in a single layer. Bake until lightly toasted, about 8 minutes, stirring once. Cool completely before serving. Store in an airtight container.  (Note: Because the nuts are high in fat, they can go rancid quickly at room temperature. Store in the fridge, where they'll stay fresh for up to 6 months.)
Posted by Mac at 9:32 AM