This past week I spent an amazing time in an amazing city that I love going to for an amazing conference and met many amazing individuals!  This year the annual NIRSA (National Intramural-Recreational Sports Association) was held in New Orleans, the Crescent City.  For those of you who do not know, I spent a weekend in the Big Easy in December for the first time (well I was there in middle school, but that doesn't count) and fell in l.o.v.e. with the city, the people, and the culture.  When I found out our conference was going to be held in New Orleans I made sure that I was going to be there.  Over the next week I plan to share my experiences while in the city and at my conference.  Some posts to look forward to...
A few more may also be added to the list as I go through and reminisce on my pictures I took.  Today I will share with you some of the phenomenal foods that I got to eat! First stop... Huck Finns 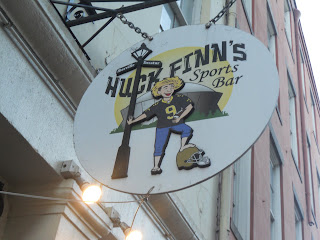 This is where I got my first and FAVORITE meal of the trip.
I actually didn't even eat my fries, because the wrap filled me and quite frankly there was nothing special about the fries... why eat it if you don't like it!  I'd eat this wrap every day if I could :)
On a couple of occasions we had ourselves some beignets, a real New Orleans treat.  One time I had them at Huck Finns and the other time I went to the famous Cafe Du Monde.  Last time I was in N.O. I got some of the boxed mix so I could make them at home, and surprisingly they are close to the real deal. 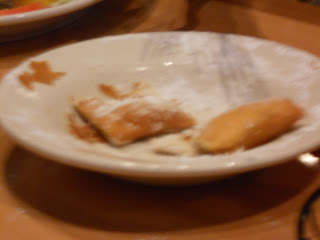 Margaritaville was another great restaurant we went to.  For those of you who have not been to one of these before, I recommend it, not just because of the food was great but also because the restaurant is InCrEdIbLy colorful and bright! 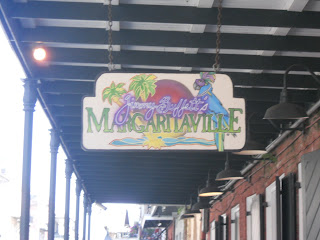 I ordered a quarter muffaletta and gumbo... both great dishes.  The only downside to muffalettas is that they are super greasy from the meats and olive "salad"/spread put on it. 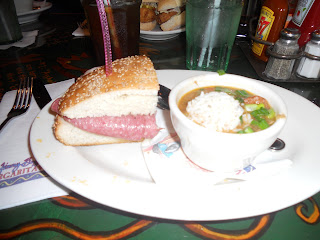 Here's the crew at Maragaritaville :) 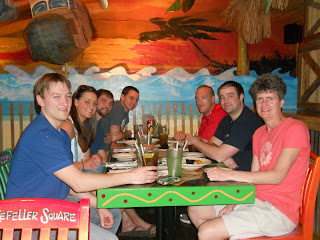 Another one of my favorite dishes that I got, which was from Mulates, was shrimp etouffee.  My boyfriend's mom makes this sometimes and hers is actually a lot more spicy than this since she uses garden peppers and we never know how hot they'll be... both renditions are awesome! 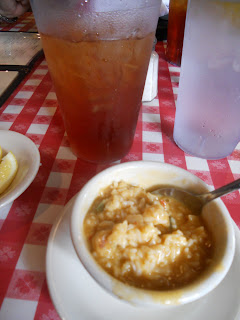 Also in this picture is an enormous glass of sweet tea! Two things about this drink, 1.) all glasses are ginormous there! 2.) The sweet tea recipe that I posted was pretty darn close to the delicious sweet tea I had in New Orleans! I ordered sweet tea for pretty much every meal... "When in Rome" right?!
That's all I have for the foods I ate while in the Big Easy.  I was able to try a couple other things at socials, but  did not get a chance to take a picture, many of them we varieties of the things I previously mentioned.  Have you been to New Orleans?  What foods would you recommend?
Hope you all enjoyed Part I of New Orleans!  Were any of you at NIRSA 2011 or have you been in the past?  If you have any questions please feel free to let me know!  And as they say in the Big Easy "Laissez le bon temps rouler"!  Let the good times roll!
Posted by Mac at 6:52 PM