As I mentioned in my last post, I received my Foodie Pen Pal package in the mail and it is finally time to reveal what I received from my December Foodie Pen Pal, Liz over at Southern Charm!

When I saw the box sitting by my mail box the anticipation was just too much, so I ran upstairs and tore it open. There it is... all nicely packed into the most exciting brown box I've ever received in my life. 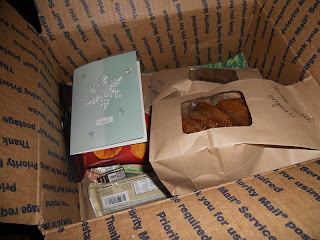 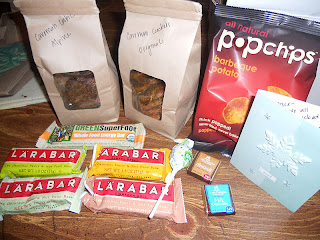 The first thing I tried was one of the Caveman cookies because I had just gotten home from work and had a sweet tooth.  Let me begin with the fact that I know nothing about Caveman cookies and had no idea what to expect, but when I bit into it I was caught off guard.  For some reason I was expecting a sweet cookie, but this was fig-like (a different kind of sweet).  My first bite took me off guard, but my second bite confirmed that I liked them! 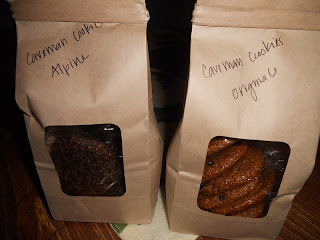 The two cocoa chocolate bites were devoured right away... in fact, one of the bites didn't even make the picture!  Pop Chips were the only thing I got in my package that I had previously tried, so I knew what I was getting when I packed these in my lunch that week.  LOVE Pop Chips! 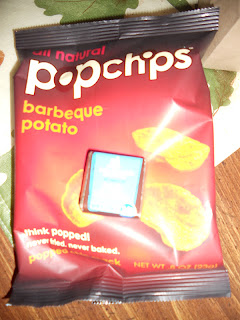 The remainder of the box consisted of bars.  Bars of which I have heard of through other blogs, but I have never tried any of them.  I'm not sure where they are sold, but I have never seen them around my part of the state.  The first bar I tried was the Fruit and Nut Larabar, loved it!  This again kind of had a figgy taste to it, but I like it because I could tell the bar was healthy and natural.  I haven't made it through all the flavors yet, but I'm a fan...now I just need to find out where I can buy them around here or maybe I have to get them online.  I took the Green Super Food bar to work one day to snack on.  Again the flavor was good, but I was caught off guard by the way it looked...it looked green like grass! So I decided just to not look at it anymore and enjoy the taste of it.  I'm not sure if this is a bar I will go out and buy, just because I was weirded out by how it looked, but it did taste good. 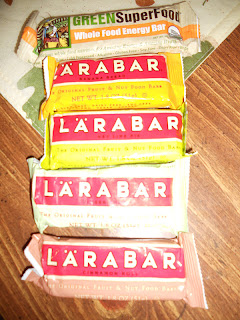 My first month of the Foodie Pen Pal program was a success!  I got to try a lot of new food items that I have never tried!  Thanks so much for all the great, healthy snacks Liz!

My Foodie Pen Pal box that I put together got sent to Tory!  Tory does not have a blog, but was sweet enough to write a guest post that I could put on my blog!  So take it away Tory...


My name is Tory – and I’m not a blogger, but I’m writing a short guest post for
Mackenzie because I was lucky enough to receive my December foodie pen pal box from
her!


Mackenzie got my box in the mail to me super quick. I hadn’t even yet been thinking
about it on the day it arrived – it was such a nice surprise! And so were all of the goodies
inside! :) 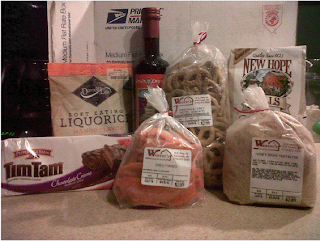 
Honey Bran Muffin Mix – Muffins were made within hours of me opening the box. I had
to take my sister to the airport for an EARLY flight the next day and these were perfect to
make ahead and then grab and go on our way out the door!
Buckwheat Pancake Mix – Neither my husband or I have ever had buckwheat pancakes!
I have to admit, dear hubby was a bit nervous on the first day I made them – not knowing
exactly what to expect. But, oh yes, they were yummy and the mix has since been made
into both pancakes and waffles in our waffle iron.
Dried Mango – My kiddos have been on a beef and venison jerky kick and started asking
to sample the “orange jerky” I received the minute it came out of the box. They loved the
dried mango and pretty much gobbled the entire bag up between the 2 of them.
Cinnamon/Graham Pretzels – My family doesn’t care for the saltiness of pretzels much
and everyone was delighted to discover these were exactly the opposite of what they
expected. Several nights of snacking on these sweet treats ensued….
Pepperidge Farm Tim Tam Cookies – Just as melt in your mouth as Mackenzie describes
on her blog! Yum!
Mango Flavor Licorice – Soft and sweet and another treat that didn’t stand a chance with
my kids around. :)
Organic Red Wine Vinegar – I hate to admit, I’ve never had red wine vinegar. I’ve
purchased and used balsamic and cider and white but I’ve never, ever had red wine. As
most folks probably already know, though, it’s a perfect dressing for my salads! And
I can’t wait to use it in the recipe Mackenzie sent me for Avocado-Black Bean Salsa
(which will actually be my contribution to the family New Year’s festivities we’ll be
attending over the weekend)! 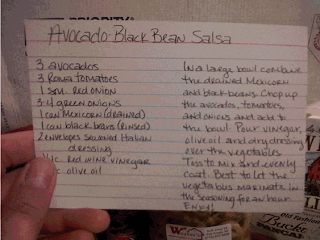 Thanks, Mackenzie, for everything you sent my way – I (my whole family) enjoyed it
incredibly!

**Glad you enjoyed all the goodies Tory! Let me know how the salsa goes over with the New Years crowd!**

If you're interested in joining the Foodie Pen Pal program (blogger or non-blogger) check out Lindsay's blog at Lean Green Bean for more details on how to get involved!
Posted by Mac at 10:25 AM