Apparently this is what I thought last night when I signed up for this race 30 minutes before registration closed.  Last night I made a last second decision to run a 10 mile races this morning... the Carson 5 and 10 in Eau Claire!

The race was put on by the Indianhead Track Club, a group I recently started running with (I think I'm going to officially join the club at the beginning of the new year).  Both the 5K and the 10 mile started at 8:30am this morning, with frigid temps around 36 degrees. 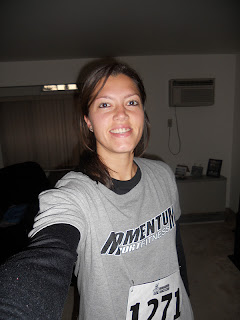 The course was mediocre at best.  In Eau Claire we have some of the most beautiful trails and areas to run in, and the 10 mile course was at out and back...that we did twice!  Granted it is fun to pass other runners and we at least knew how much further we had to run the second time around, a change of scenery would have been nice.  Since the 5K and 10 miler started at the same time and ran the first 2.5 miles together I had a really hard time pacing myself early on.  Despite those two things, I really had a good time! I felt really strong up until the last mile where I really had to focus.  Other little facts...

Bathroom breaks: 0
Water breaks: 2 (they ran out of cups on our last trip...bad news!)
Walk breaks: 1 (very short and up hill)
Pre-race food: Oatmeal with brown sugar
Food during the race: Nothing (this may have to change soon) 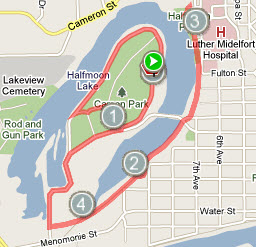 When I crossed the finished line my time read somewhere around 1:30:something.  I'm waiting for the official times to be posted to see how I did relative to others in the race and in my age group... stay tuned :) 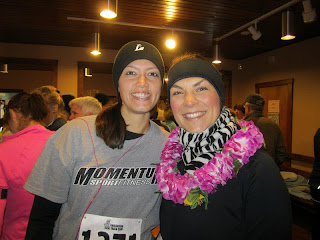 This is the lovely lady who told me about the race, thanks dear! We went to high school together and are just now, 6 years later, hanging out more since we are both done with college. 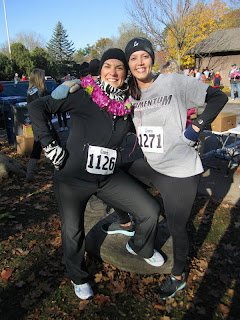 P.S. I just bought those pants last night, because I wanted to run in official running pants... I know I'm a nerd!  They were great though and they may make an appearance in my Halloween costume tonight (not to worry they are in the wash right now)!

Race swag... this shirt is pretty much it.  I like the design, it is of Paul Bunyan which was where the race start, at our Paul Bunyan logging museum and I like the material (tech T).  The rest of the swag in the bag wasn't so swaggy. There were a lot of advertisements and some coupons for stores that I never really go to. 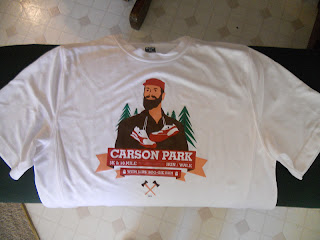 Post race we celebrated our great races with some coffee and pancakes!  Celebrating with coffee seems to be a reoccurring theme... see here and here. 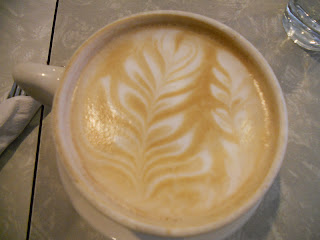 This is the first time I have really done a race in my home town, so I had some supporters along the course and loved it... thanks guys!

Anyone else run a race this weekend?
Do you like running in your home town or in other cities better?
Any Halloween costumes out there that are being shown off tonight?
Posted by Mac at 3:20 PM