Blasty Blast of a Weekend

I don't know if anyone out there is a Dane Cook fan, but if you are, you may recognize the "Blasty Blast" that made its was into my post title :)

On to the recap of my weekend...

Unofficial Half Marathon (aka Mac's Attack Half?)
Okay so maybe I had a little bit too much time on my hands during my two hours of running.  Coming up with a  name for my unofficial half marathon was my way of making my run feel more like a real race, however, I really struggled to come up with anything all that exciting, so Mac's Attack Half Marathon it is.


I had some issues with my Garmin, my Nike Plus and mapquest.com matching up on the distance, so I ran the distance from mapquest and then used Nike Plus to determine the actual time that I stopped at (since it was closest to what mapquest told me was 13.1 miles), and then I used my Garmin to determine my water breaks (since I could see the distance the whole time, where my Nike Plus was on my arm and I couldn't see it).  Over all here's where things played out... 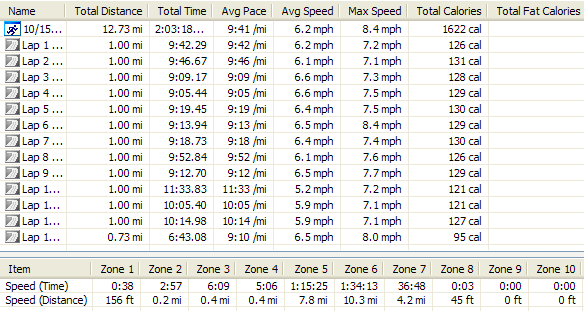 Based on the Garmin mileage here's a snap shot of what happened on my run...

I really struggled pacing myself, as you can see from my splits being all over the 9/10 minute mile range.  I also continued to learn just how important your core is in running.   By mile 11 I seriously felt like I had gotten sucker punched in the stomach, that's how sore my abs were!  I guess my heavy breathing for two hours really took a toll on my stomach muscles.

This is what I used for my "official" unofficial race time.  If you notice I actually went 13.3 miles according to my Nike Plus.  Why would I run an extra .2 miles when I was exhausted you ask?  My iPod told me when I had 100 meters to go, but it failed to mention when I actually completed the 13.1 miles.  At some point during my last "100 meters" I was like "Really?! Are you kidding me?  This is WAY more than 100 meters!", so I looked down at my iPod and sure enough it was .2 miles past my goal!  I have no idea what happened, this ever happened to me before, but I wasn't incredibly pleased.  Oh well, not the end of the world.

# of water breaks: 4
# of hills: 4
# of food breaks: 0 (I haven't used food in either half marathon I've run, it seems to work for me)
# of bathroom breaks: 0 (some how I have managed to dodge this one in both my half marathons)

If you remember from my first half, I PR'd with this "race"!  I wish it would have been official, but I'm still pretty proud of beating my previous half marathon time!

Green Bay
When we got into Green Bay we stopped by Jed's uncle's house to pick up our tickets and go out for dinner.  It was here where I fell in love with pugs (Tina would be so proud!)!  His aunt and uncle own a pug and it was just the most precious thing I've ever seen!  They have now made it to my list of dogs I want (pug and/or vizsla).  I didn't take a picture of Bella, the precious pug, because I didn't want to seem like a total obsessive weirdo, but I am now regretting that decision.

Later Saturday night my girl friend from college and her fiance decided to show us around for  a little night on the town. Random fact, we stood in the same order last time we took a picture together in GB, funny huh!  We never fail to have a great time with these two! 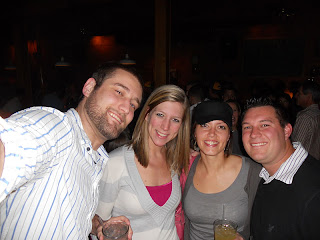 After a fun night out, we woke up the next morning bright and early for the noon Packer game.  Luckily my girl friend lives pretty close to Lambeau Field so we didn't have too far to go.  We tailgated for a little while, then headed in for the game! 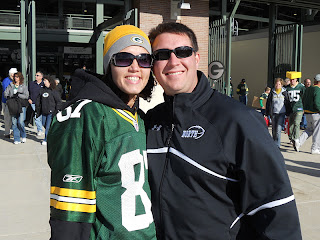 During the National Anthem, there was a fly by (I don't remember exactly what jets they were, but they were specific ones).  I cannot get over how loud the jets are!  They did a fly by last time I was at a Packer game and both times they were so loud they made my eyes tear up! 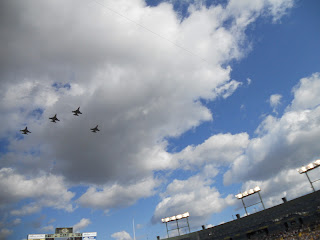 Let the game begin!  The Packers were sporting the old ACME Packer uniforms, which are blue and yellow.  It was really neat to see them play in those uniforms, but it took me a while to really feel like I was watching the Packers and to keep the teams straight, it was a Packers vs. Rams game so the colors were similar. 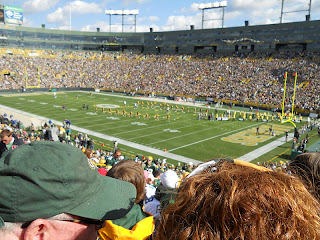 Words cannot describe how much I love this guy!


It was another win for the Pack this weekend!  It has really been a great year to be a Wisconsinite, it doesn't always happen like this with the Badgers, Brewers, and Packers having a great year, so I'm eating it up :)

What did you all do this weekend?  Did I miss anything being out of town?