For those of you who read my blog regularly you know this is an odd time for me to post.  However, this morning I had, what I felt, something blog-worthy to post about and a few minutes to do so. 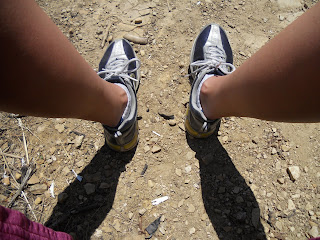 This morning I did what I normally do; I got up, checked out some blogs, ate a pre-workout snack, then hit the road for a run.  However, on the way out the door I knew this run was different from others for a few reasons: 1.) I had an idea of how far I wanted to run (4 miles), but I did not map it out. 2.) I was going to wing the run (I never do this, I always have a set route). 3.) I heard there was some damage over on Green Bay St. from the tornado last night so I was going to run that way to check it out and let that determine my route.

Green Bay St. is about 1.5 miles from my apartment.  This first mile and a half I got to experience what I consider to be normal.  However, the next .75 miles took me the longest out of the entire 3.65 mile route.  I truly did not expect to see what I saw.  I have been so incredibly fortunate to have never been in or right near any sort of natural disaster zone, this is the closest I have ever been.  There were trees uprooted, power lines down, roofs blown off, metal bent around poles, electricians, policemen and firefighters everywhere!  I wish I had pictures to show you because what I am telling you could never give you the full effect, but I do not normally run with my camera and even if I did I don't think it would have been appropriate to be taking pictures at the expense of many other peoples' misfortune.  I saw many people out on the streets who lived in the houses that were ruined or damaged by the storm which was absolutely heart breaking, and was probably the point in which I got the lump in the back of my throat.  I went as far as I could on Green Bay Street which was supposed to one of the streets that got hit pretty hard.  I didn't make it that far at all due all the sidewalks obstructed by trees and parts of buildings/houses.  I then turned down 13th street and went two blocks that way and there was still a little damage, mostly trees and branches down.  Once I got back on to West Ave, which was only two blocks (towards my apartment) from where I had just seen a completely different world, it was as if nothing had ever happened last night.  It's so crazy that there can be such a fine line in a city where disaster hit and where it didn't.  So I carried on with the lump in my throat for the next mile.  As I was running North on West Ave I could see a bunch of police/ambulance/fire truck lights ahead of me, so I decided to go down that far to see what was up and then turn towards my apartment to head home.  I really shouldn't have done that.  When I got down to where all the lights were, I saw it was a four car pile up and at least one person was being sent to the hospital. Breaking point...Big tears welled up in my eyes.  I really wasn't sure what to do with myself, I had never had this kind of experience on a run, nor did it bring back good memories.  After I turned right before the accident I walked the rest of the way home. This morning was a little bit overwhelming for me, but I think it was a good way for me to start my day and make me realize how lucky I am and how thankful I should be.

My thoughts and prayers go out to the families' and individuals affected by last night's tornadoes!
Posted by Mac at 8:55 AM