My Stevia came! My Stevia came!  Despite my sluggish morning, when I heard a knock at my door from the UPS guy delivering the Stevia that I won from Jennifer giveaway last week I perked right up! 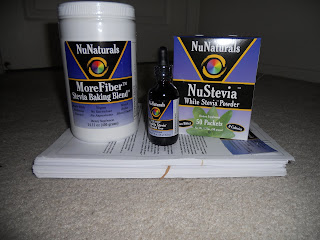 Included in the package is:


Among the recipes featured in this recipe collection, that you will hopefully see in the not so distant future are:

Since my comment that I left on her post to get entered into the giveaway was this... 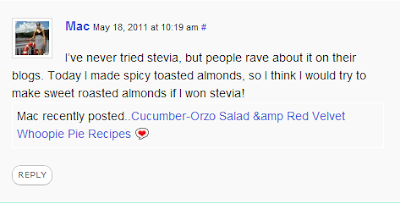 I of course had to follow through and try making them! The temperature and cooking time were the same as when I made the spicy toasted almonds, I just switched up the ingredients to make them sweet and salty!
Sweet & Salty Toasted Almonds
1 cup almonds
1/2 Tbsp olive oil
1 packet Stevia (or 2 tsp sugar if you're taking that route)
1 tsp salt
Dash of cinnamon
I overcooked mine just a hair because I wasn't paying attention, but they still tasted awesome!  I was really surprised that Stevia gave the nuts the same sweet flavor that I would have tasted had it been with regular sugar... I'm sold!
I couldn't stop at the toasted almonds though...I had to try out one of the recipes from my new Stevia recipe collection. I really need to hole punch these papers and put them in a binder so I can call it a recipe book :) The recipe that I tried out was Chewy Chocolate Chip Cookies, the ingredients are as follows:
1 cup flour
1 scoop protein powder (optional) <-- I did not use this
2 tsp cocoa powder
1/2 tsp baking powder
1/4 tsp salt
3/4 cup MoreFiber Baking Blend
1/4 cup canola oil
1 tsp vanilla
1 tsp mint extract (optional) <-- I did not use this
1/4 cup chocolate chips
Recipe additions after the first try: 2 eggs & 1/4 cup water
Combine flour, protein powder, cocoa, baking powder, and salt, stirring with a whisk. Place Stevia MoreFiber Baking Blend and oil in a large bowl; beat with a mixer at high speed until well blended. Add vanilla and mint, beat well.  With mixer on low speed, gradually add flour mix.  Beat just until well combined, then fold in chocolate chips. Drop by the tablespoon 2 inches apart onto a sprayed baking sheet. Bake at 350* for 10-12 minutes or until just set. Remove from oven and cool for 5 minutes. 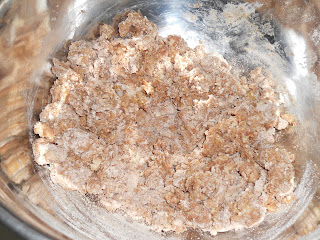 After I mixed all these ingredients together like they said this is what I got.  Very clumpy, but not quite moist or sticking together as a whole. Now granted I do not have a mixer (it's on every wish list I have... birthday, Christmas, Hanukkah even though I don't celebrate), I don't think the mix would have turned out much different.  So I improvised.  I added two eggs and mixed it together... still a little dry.  So then I added about a 1/4 cup of water and got it to a point where at least it looked like I could form balls with it. 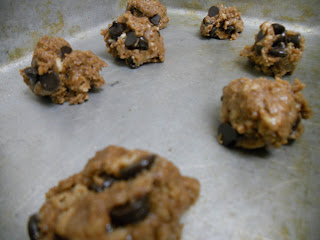 Since the dough tasted good, I went ahead with the cookies and baked them up!
They weren't exactly pretty cookies, because I don't have a mixer to mix the ingredients together really well, but what they lacked in appearance they made up for in taste.  Once again I am amazed that Stevia presents the same sweet taste that sugar does!  These chocolate cookies are a must try!  They only made 16 for me, my cookies were moderately sized, but I always undershoot what recipes tell me it should yield.
Have you tried Stevia?  What do you think about it?  Any good recipes you used it in that you would like to share with this newbie?
Whew!  Two big days spent in the kitchen in a row! Who knows what tomorrow will bring!
Posted by Mac at 11:59 PM