As promised, my RCU Charity Classic 10K race review, but first I wanted to show you a few more pictures from Sunday Funday!
We went mini golfing yesterday in the early afternoon to continue Sunday Funday!

After mini golfing we got a call from his parents and we headed up to Lake Wissota to meet them out on their boat! 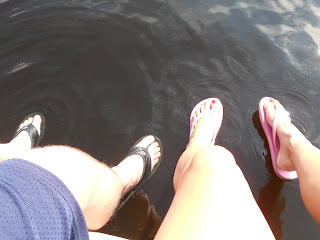 We love us some good sun time! 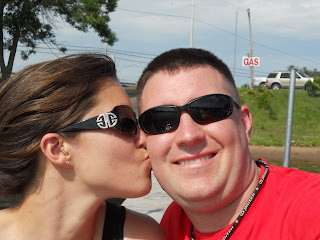 How did you spend your Sunday Funday?  What are some of your favorite summer activities?
**********
On to the race review!
The RCU Charity Classic is a race put on in my hometown by my local bank.  The race is a smaller one with under 850 participants in the four races (10K, 2 mile, 1/2 mile, 1/4 mile).  All proceeds from the races go to the Community Table in Eau Claire and St. Vincent de Paul Food Shelf in Rice Lake (a town about an hour north of us). 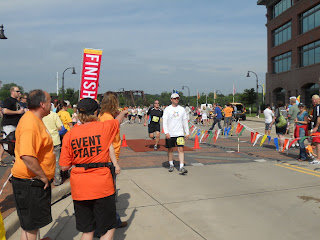 The course is described as such...

The 10K race will feature a new course in 2011.  The 10K race course showcases all three of Eau Claire's main parks, Owen, Carson and Phoenix Park, as well as views of the Chippewa and Eau Claire Rivers. The course incorporates a part of the Chippewa River Recreational Trail that runs within the city. The terrain is generally flat with a few gentle, undulating hills and welcome shade.

They really did a good job of describing the course!  Now on to the positives and negatives of the race...

Negatives
I know my negatives far outweigh my positives, but despite that, I did enjoy the challenge of my first 10K!  I actually found this distance to be much more difficult that my 5K and half marathon distances, I think because I feel like I can run faster and get caught up in all the runners' paces around me.  What do you think is the toughest distance to run competitively?  I knew mile 3 that I was going faster than my normal pace, because I wanted to stop and walk.  But I told myself no, the only walking I'll be doing is at the water stations while I'm drinking my water.  Do you stop and walk at water stations or do you run through them?  I also wanted to stop and walk at mile 4, 5 and 6, but once again I told myself, "no, you are NOT stopping".  My mantra that kept me going was very simple, but just what I need apparently, Just keep putting one foot in front of the other.  When I hit mile 5 I was hoping to be able to kick it in second gear, like I did for the last 2 miles of my half marathon, but I just couldn't do it.  So I told myself as long as you just keep this steady pace across the finish line you'll be fine and make you goal time of 57 minutes.  Well I kept that pace for the majority of the last mile and a half, but with .2 miles left I turned it up a notch (thanks for the cheering random people!) and sprint through the finish line.
I ended up in 204th place out of 411 10K-ers

Thanks to my awesome running crew of old work friends that ran the 10K with me! (I told you the shirt would make an appearance at the race!) 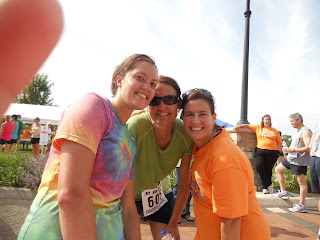 Overall, although I did not care for all of the logistics of the race, I did enjoy the course and the nice location to spend time with my friends before and after the race.  I also liked that they geared this to be a family event with the various levels of races.  However, I probably won't run this one next year unless I have my friends running with me again.
Did anyone else run any races over the weekend?
I'm hoping to have this race posted on my official "Race" page this week, but in the mean time check out the new Laugh of the Week!
Posted by Mac at 10:55 PM